As a student think tank, the Roosevelt Network at UC Riverside works to conduct research and write reports, policy memos, and briefs. The chapter hosts policy discussions in which members can build their proposed solutions using the experience of their peers at UC Riverside and across the West Region. Supported by the national Roosevelt Network, members are provided resources in the form of trainings that help educate on best practices when publishing.

You can find some of this chapter's highlighted pieces below: 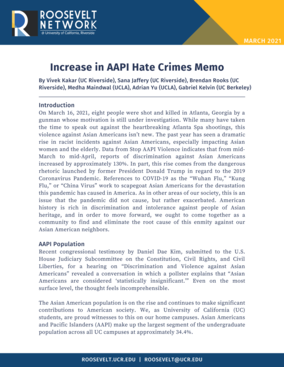 On March 16, 2021, eight people were shot and killed in Atlanta, Georgia by a gunman whose motivation is still under investigation. While many have taken the time to speak out against the heartbreaking Atlanta Spa shootings, this violence against Asian Americans isn’t new. The past year has seen a dramatic rise in racist incidents against Asian Americans, especially impacting Asian women and the elderly. Data from Stop AAPI Violence indicates that from mid- March to mid-April, reports of discrimination against Asian Americans increased by approximately 130%. In part, this rise comes from the dangerous rhetoric launched by former President Donald Trump in regard to the 2019 Coronavirus Pandemic. References to COVID-19 as the “Wuhan Flu,” “Kung Flu,” or “China Virus” work to scapegoat Asian Americans for the devastation this pandemic has caused in America. As in other areas of our society, this is an issue that the pandemic did not cause, but rather exacerbated. American history is rich in discrimination and intolerance against people of Asian heritage, and in order to move forward, we ought to come together as a community to find and eliminate the root cause of this enmity against our Asian American neighbors.